Back to Reviews page
I'm well aware that these album write-up posts don't tend to get a whole lot of attention, because not everybody can stomach power metal. It's an intense and attention-demanding genre at the best of times, and you either "get" it or you don't. The inherent silliness and fun of it is something that many bands like Limozeen and Edguy buy wholeheartedly into themselves, and when it does attempt to take itself seriously, it's difficult to do the same when you believe the stereotype of the genre being made up of astonishingly pretentious and mockable science fiction concept albums by people with silly names like the Guardians of Time.

Machines of Mental Design, a science fiction concept album by the Guardians of Time, then, isn't going to do a lot to change that. This was one of the rarer albums that I got in the giant pile last Christmas (and have still only listened to just over half of, help) as it's from a band from manic Norway that disappeared shortly after making it, their first storyline-based effort and second album overall. Actually it's the conceptiest concept album that I've yet seen - Iron Savior used to provide a storyline at the start of each album and then explain how each song fit into it, but in this, the lyrics in the booklet are presented not as lyrics but as large paragraphs of prose interspersed with extra storyline text that isn't part of the song (though the submitter to Darklyrics has split them up more than they are as printed, making them remotely followable).

One of the first things that you hear on the album is a scream that's held for about eight seconds, introducing Bernt Fjellstad as not only the only member with no non-English characters in his name, but also an impressive vocalist in the same vein as Daniel Heiman. That said, he's not as amazingly over-the-top - most of the time he's only as high in pitch as you would reasonably expect and just allows himself the occasional shrieking flourish singing about the "family of LIIIEEEIIIGHT" without getting too ludicrously stratospheric. Death vocals also make an appearance in the middle of the album, which I'm honestly getting more used to now as long as they're used for effect and they're not expecting me to cope with someone vomiting into my ears for an entire song.

The general subgenre of the music jumps about a bit, but is generally on the fast progressive side, relying not so much on catchiness and traditional song structure as just moving through different sounds and sections. I'm trying to find someone to compare them to, and I suppose it's a bit like early Heavenly with a strong flavour of Dream Theater, but a bit better than you'd imagine the result of that to be (and as you can tell, making these kinds of comparisons is often futile anyway). Quite remarkably, I don't hear any keyboards on the album at all, and they rely entirely on the more traditional metal lineup - something that's not very common at all now.

I listened to it for a while just to check that all potential grower tracks had grown, because I've never said this about an album before because whenever anyone else did I always disagreed with them, but there's an identifiable point where it drops off in quality - and that's track 9, just over halfway through (though I admit I revised this up after deciding that I quite liked War Within after all). At this point, after a strong first half, you get the feeling that they were beginning to run out of ideas - there are a couple of memorable and distinct parts to them, but they seem to recycle melodies remarkably quickly and you can honestly sing some of the earlier tracks' verses along to those of the later ones. Perhaps the strict reliance on guitars only helps it begin to sound all the same. After some forgettableness, the album closes by fading out one minute before the last track's stated running time and concluding with a terrifying mashup of Doctor Who noises and snatches of violin, like Braid gone insane.

For an example song... I'll go with one right in the middle of the "good" section, and the one that I think is generally the best on the album as well as showcasing their unusual lyrical style, here basically singing a subway advert. And it's got a nice guitar melody.

In the end it seems to be a decent early album by a band that was just finding its feet and could have gone on to be really good - it's a shame that they disbanded. To bring back the comparison I made at the start - with Lost Horizon having gone the same way after an equal number of releases (though they were substantially more unintentionally hilarious), the lesson here seems to be that if you start off with a really impressive singer you're doomed. However, if you hire someone to record as you poke them in the ribs with a pencil for two albums and then crawl towards recovery, well, that's the route to recognition at the top of the genre. 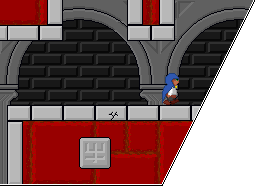