Back to Reviews page
Albion is a German RPG that vastly confuses me. It's because when I look at it objectively, it isn't really anything spectacular. I'll get the bad out the way first - most obviously, the turn-based battle system is sluggish and shares the common problem among old RPGs that the majority of fights are just endless strings of misses before someone's lucky enough to get a hit in. To counteract this, you really need to seek to level up extensively to stand a chance later on, rather than have experience points come in at a natural rate as developers seem to have worked out now. Finally, once you get past the initial lengthy storyline setup, it's rather unclear what you're meant to be doing, and consulting an FAQ regularly is necessary to point you in the right direction.

After all that, it sounds like it's going to be a bit of a job explaining why I like this game, but the screenshot on the left (which is from a cut-scene fairly early on, and is the first screenshot to appear on a Google search - I wonder why) isn't the only reason that it appealed to me. There are very few games that manage to inspire an actual sense of awe, deserving to be called "epic", and those that do are usually ones that take advantage of technology that we just didn't have in 1996 - Civilization 4, Shadow of the Colossus, and, though I'm loath to admit it, Halo all come to mind. But Albion is among them.

The storyline is what propels this game out of mediocrity and into my all-time favourites - many RPGs have decent enough plots that could be translated into films, but this one (as the HOTU description says) really could be a novel. The game begins as a huge mining ship arrives at an unexplored planet rich in natural resources codenamed "Nugget". The mission is to pull the planet to pieces and ship it back to Earth, which a couple of hundred years from now is struggling with energy supplies. A pair of Germans (Thomas and Rainer - which now that I look at it is a partnership of names dangerously close to the membership of Modern Talking) venture out in a scouter to inspect the desert world. As chance would have it, something goes awfully wrong and they're forced to crash-land - where after waking up, they discover that the planet is not a lifeless desert but home to an intelligent race of vaguely catlike creatures, the Iskai.

The makers of this game have done an incredible job of fleshing out this new race (and the others that you later discover inhabit the planet). You don't just interact with them directly as the storyline dictates - you can go up and talk to anyone at all and learn about their job, life history or anything else about their society. A wide variety of topics come up - diet, building techniques, social order and sexuality. In this way I think it's admirable that it's truly a "mature" game, not in the pornographic sense of the word but genuinely something that you need to view maturely to appreciate.

Your first obvious objective is to find the landing site for the mining ship and stop the excavation from happening. A number of events get in your way during the course of this mission, with the result that easily about half the game (fifteen or twenty hours) is taken up just by exploring the world. During the course of this, thanks to the massive amount of thought that's gone into writing about this other race, you gradually discover more about the planet, getting to know its places and people, and in a way, falling in love with it. Stop laughing, I'm serious. Then, halfway through the game, the storyline suddenly turns around with a catastrophic twist, and asks you to save it from disaster. It's one of the most emotionally involving games that I've ever played - by the stage the real plot emerges, you've learned enough about the world to genuinely care what happens to it.

Another thing that arouses your concern and therefore makes this game work is the sense of weakness that you have of your characters - something that I didn't get the feeling of again until Silent Hill years later. The characters you meet on the planet may be experienced with the use of magic or weapons, but your starting party members certainly aren't. Thomas is a scout pilot and Rainer is a government inspector, and it shows a bit. With some training they can handle weapons reasonably well (though Rainer is always useless at hand-to-hand combat), but unless you've hunted around on the initial ship chapter, you start off with largely worthless equipment and, often, a real sense of helplessness. When you get Joe the technician to join your party late in the game, he doesn't match up to the rest of your characters in skill or inventory - he comes armed with a video camera, set of spanners and a USB pen drive.

The best bit, though, is how that stage of the game makes fun of itself. Throughout the chapters of the game that take place on the mining ship, you're continually confronted with typical action/adventure game puzzles that involve flipping switches in some arcane order to open a door - and rather than try to explain why you have to run around on a set of tiles highlighting them in a cross shape before progressing, they have Joe continually complain about the illogical puzzles that you're facing, threatening to hunt down and break the fingers of the employee of his that decided a vital door should be opened by four individual switches that you have to run from one side of the room to the other to press in time.

But after initially playing it when I was twelve, it took me until the end of last year to actually get around to completing it (with, I admit, considerable help from an FAQ, for the reasons outlined above). It's an example of a game that you really want to work because of the way that it's so well done in every way but actual gameplay, and it saves itself with its charm, character and epic storyline.

And it has catgirls in it. 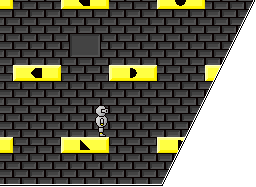