Back to Reviews page
I suppose if I were to quickly sum up how Twin Snakes made me feel, "weird" just about does it. I hunted this down for Whitney's birthday - it's a Gamecube remake of the original Metal Gear Solid, and it gives me a tremendous sense of nostalgia for when I was 14 (which is honestly a bit worrying seeing as I didn't think that the original game had been released all that long ago). But among the obvious graphical enhancements that come with transplanting the original game into the engine of its sequel, there are some really odd differences there.

MGS was really notable in 1999 because of its emphasis on stealth (unfortunately copied really badly by many games shortly afterwards, but I don't blame it for those) - the idea of it wasn't to go in there like Judas Priest with All Guns Blazing but to move about guarded areas undetected as much as possible. From a gameplay perspective, the most obvious change here is that they've replaced the original's Genome Soldiers (whose genetic enhancements apparently included chronic short term memory loss and about as much peripheral vision as looking through two kitchen roll tubes) with more organized MGS2-style squads who radio to check in with each other and will inevitably seek and destroy you if you hide. Their efficiency sort of takes away from the game for me - I felt part of the fun of the original was being able to bemuse the dimwits by doing things like poking your head round a corner for a moment, waiting for them to all run past you and then sneaking away under a cardboard box like in Wallace and Gromit, stopping if they ever turned around. If you try that with this lot they just pick up your flimsy disguise and shoot you in the face.

The acting has all been re-recorded and is generally slightly worse. Most characters who had European or East Asian accents have defaulted back to American, with the notable exception of Liquid Snake, who has been remodelled apparently to resemble Sean Bean and has been allowed to keep his distinctive murdering of a voice from somewhere vaguely posh in England. The new lines really bring out Kojima's writing style of having the main character's dialogue consist almost entirely of repeating everyone else's dialogue with question marks on the end, and I think that the storyline has been made rather more blatant and obvious as well, with a lot of lingering over why the DARPA chief's password hasn't been discovered after all and so on. (The detail that most of the plot is the most amazingly colossal load of twaddle notwithstanding for the moment.) Perhaps I'm just remembering the original wrongly, but this obviousness extends into the game in other ways - in the lab later on, the original game has a PS1 on one of the desks, which was a nice detail if you happened to spot it. Here, there are a couple of Mario and Yoshi figures stuck on top of a monitor - equally nice if you find them yourself, but just in case you don't, the camera treats you to great swooping shots of them throughout the end of boss cutscene.

Speaking of the cutscenes, the most obvious change apart from focusing slightly more on Kojima's distracting urinary fixation is that they've turned the game into The Matrix. The original game had a cinematic style that I hadn't ever seen done as well before, but as it was released just before Keanu Reeves and company put a whole new style on to slowed time and sunglasses, it seems that the makers decided that they'd missed out on the style and therefore took the opportunity to go as mad with it as possible this time around. In every cinematic, the camera follows at least one bullet, missile or flying section of wall across the room as everything slows down and optionally explodes, and the laws of physics are broken in at least three different ways each time. It's at that uncomfortable place where I can't tell if they were going the Devil May Cry route and making everything really camp and over-the-top on purpose or whether they were actually serious about it. Even simple things are exaggerated - one of the highlights is when Snake arrives at the top of the underground base, where in the original game he just dodged to the other side of the door quickly to listen in. In Twin Snakes, this has been upgraded to a hysterically impossible cartwheel over the entrance. Shout the word "BOING!" as loud as possible at the seven second mark for the full effect.

I think I've probably demonstrated enough by now. Recently, there seems to have been a trend of making remakes or updates of things without changing the title - like "Prince of Persia" (no subtitle) and "Alone in the Dark" (also no subtitle) on the Xbox 360 - and I'm not sure if I'm being totally neurotic by thinking that it's faintly insulting, as if they want to ignore and overwrite the apparently inferior original. This one has the courtesy to add a subtitle, but sort of makes it even worse by saying on the back that this is "Metal Gear Solid the way it was meant to be played". It isn't - it's an entertaining over-the-top fusion of MGS and MGS2. Metal Gear Solid on the PSX was how Metal Gear Solid was meant to be played, which is why it's called Metal Gear Solid. 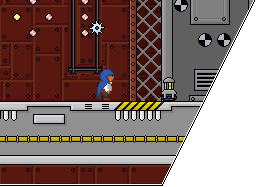