I have no idea why I have this picture. I feel I must have saved it to my hard drive months ago with some sort of purpose in mind, but that purpose has long gone from my memory. Nevertheless, the pointing action might be somehow appropriate to head this post, because the first DS game that we've got out of Gamefly is Phoenix Wright: Ace Attorney.

As futile as it is to assign genres to these things now, the game is a sort of adventure type thing starring Phoenix Wright, a junior defence lawyer with the haircut of Falco Lombardi, who over the course of the storyline has to go up against various prosecutors to rescue apparently obviously guilty defendants. The "Ace Attorney" part is something of a misnomer, because his investigative method consists of being a colossal doofus, thinking aloud to himself far too much, putting up with his annoying teenage spirit medium assistant, and stealing anything that isn't permanently fastened down from the immediate vicinity of the crime scenes. "Ace Kleptomaniac" would seem more appropriate sometimes.

A while ago I detailed a CSI game that we Whitney had bought and had then been hastily returned. Somewhat insultingly, I'm going to compare it to that, because this game shares much the same play style - the course of investigating a case involves you wandering around clicking on everything that looks remotely interesting and exhausting everyone's conversation options, then repeating the process until you get somewhere. The execution of it is naturally a lot better than the polygonal disaster that I had previously seen, of course - Phoenix Wright instead goes for a hand-drawn middle-of-the-road Japanese style, with only a moderate number of unfamiliar visual idioms. !!! However, there's one thing that begins to grate very quickly - I don't know if it's just because I'm getting older, but the game shares the same !!! sort of epileptic presentation that I find makes it very uncomfortable to watch most American television, hitting you with !!! full-screen flashes for little reason very often, complete with explosion sounds and screen shakes when any part of the conversation invites anything approaching mild surprise. They often appear in the mid!!!dle of sentences when you least expect them, making it like trying to read while someone is throwing flash grenades into your lap.

But where the game really comes together is the courtroom scenes. Even though they're about as realistic a depiction of a trial as CSI is of police investigation, anything involving computers, or the world in general, and as much as a slog as the adventure sections can sometimes be to get there, the hilarity of them makes it all worthwhile. This unbalanced fictional version of handling a trial involves a prosecutor presenting a witness to the permanently bewildered bearded judge (who I find best if you mentally voice him as Brian Blessed) and you having to scroll through parts of their testimony, press them on suspicious points, search through your inventory (or Court Record) for items that contradict the sentence that you're examining, and ultimately present that as evidence. This triggers the now-famous shout of "OBJECTION!", which is still funny even though its meme status has been and gone now, and if you've got the clue right, the background music will stop, Phoenix will thump his hands on the bench, and then perform the patented Phoenix Wright Point, signalling the player to prepare for the oncoming baguette beatdown.

It even manages to avoid becoming repetitive with a sequence of increasingly unlikely surprises and turns of events, once going as far as putting you through the whole Game Over sequence before you're miraculously rescued. It's also a nice touch that said Game Over sequence just announces that the suspect's case will be forwarded on to a higher court, alleviating any guilt that you've just killed someone or anything, but with my experience from the visa process I have the feeling that being hit with the reams of paperwork as a consequence would somehow be worse. And as the prosecutor and witness often share positively Arnold Rimmer levels of smugness, it makes it all the more satisfying to watch them try to wriggle their way out of any contradictions you find - the whole thing has a glorious exaggeratedness to it that's almost equal to the average episode of Iron Chef America, and is a good application of the unique Japanese sense of mania.

And I laughed for several hours after discovering the catchphrase of one of your clients, the Steel Samurai, was "For Great Justice". 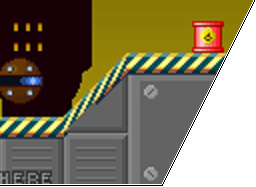