Back to Reviews page
While it might not be a fantastic idea to traumatize myself with Silent Hill 4 a couple of weeks before Whitney goes to visit California in a couple of weeks, leaving me alone in the flat, we started playing it last night.

I should say right now that I've never been particularly good with horror films. Just about the only ones I've seen are Braindead, Cube and Night of the Living Strawberry Pie, and half of each of those were watched with my eyes closed. But horror games are slightly different - they can be cleverer when you're in direct control of the action, and somehow I have a lot of respect for something that can successfully scare me in that way rather than resorting to jumping-out surprises or gratuitous flying body parts. The Silent Hill series has had some of the best examples of those that I can think of, and combined with the excellent and confusing storyline, I became something of a fan of it after finishing the first game in 2001 or so.

Silent Hill 4 changes a lot of the normal formula. Instead of wandering helplessly around one nightmarish location after another hoping you don't suddenly find yourself in another dimension, the storyline dictates that you have a single sort of base camp room that acts as a refuge, and you switch back and forth between it and several other places that you access through an increasingly-sized hole in your bathroom wall. (I'm trying to think of another way to say this, but it feels strangely like a grimmer version of Narnia). So far we've fought our way through a ghost-ridden subway and dark forest, while the main character's dialogue very gradually increased from "What the hell?" whispered lazily to himself about five times near the start. He just doesn't seem to have any life at all - it's like listening to Ben Stein reading out the phone book.

It's not just the plot, but the whole feel of it is very different to the other Silent Hill games. The new inventory system, as much of a shock as it is to change it after this long, actually works rather well. Instead of pausing the game and having to go into a separate screen to heal, change weapons, or do much of anything, you just have to hit the D-pad to bring up a list of items that you're currently carrying and manipulate them from there. But combined with that change, other classics have gone out the window as well - you have no torch, and the classic radio has been replaced with each monster doing odd things to the game soundtrack whenever they're nearby.

To put it bluntly, in a statement that is bound to come back and bite me several times over later on, it doesn't seem to be particularly frightening. Even going into the abandoned orphanage, which as anyone with half a brain cell will tell you is a tremendously bad idea in anything in a horror setting, doesn't produce anything that'll stay with you. And somehow, even though I'm not someone who exactly reacts well to scares, that's disappointing. For example, after turning it off last night, transferring to my laptop and then realizing that my pen drive was still sitting on my desk in the front room, I was able to go out into the dark apartment and walk all the way across the room to take it without any hesitation. Well, no more than usual, at least. As expected, I had a Silent Hill dream last night. It involved having to fight a monster that resembled a skeletal wall, but morphed to disguise itself as a Japanese girl before I defeated it by repeatedly flinging it over my head down flights of stairs. And while that sounds faintly disturbing now I write it out, it was more annoying that actually frightening - something that I would say applies to the Silent Hill 4 as a whole, seeing as we completed it the evening before.

First of all, as feared but expected, it did get more frightening since the post I made near the start of the game. In fact, it's a very clever turnaround - you start off being able to cling to certain rules like knowing that you can escape back to the apartment at any time and regroup, but these luxuries are gradually taken away from you, making the titular Room a gradually more threatening place as the second half of the game goes on. It changes from being a safe haven to somewhere you actually dread going for fear of seeing what else has gone wrong since the last time you visited it.

Those scares are clever, but some of the other ones worked less well. In particular, the bosses are not nightmarish creatures that need cleverness or tactics to defeat them - they're floaty ghosts that are introduced by cut-scenes with that kind of blurry, shaky camera that you see in horror film trailers that ham it up so much that they might as well be subtitled "** SCARY THINGS HAPPENING **". This is the only time that I've actively been compelled to skip cut-scenes on my first play-through of a game (and I've played MGS3) because they go on for ages and you get the point after about five seconds. To defeat them, you have to knock them down and stab a Sword of Obedience through their chest, which works a surprisingly small percentage of the time and any sort of fear of the invincible enemies gives way to frustration as you try and finally get them to fall over for a minute.

Fighting in general is something that's never been particularly sophisticated in any of the games, but the problem became more apparent in SH3 when they put more emphasis on it. SH4 reworks the system a bit, but it has to be said it doesn't work very well either. The game almost has this bizarre golf theme to it, with a complete set of surprisingly breakable clubs lying around throughout the game and a "swingometer" at the top that you use to charge up your hits before letting loose with either a weedy stab or a massively exaggerated swing. Both of them will usually miss until you find weapons with a decent range - there's very little emphasis on guns now, with most weapons being improvised from tools lying around.

As if that wasn't enough, you'll be thrilled to hear that after the hospital level (complete with Dalek-like possessed wheelchairs) the game becomes a giant escort mission, with you having to go through each world you've visited again with your neighbour Theo-Dacabing it up behind you. I can think of absolutely nobody in the world who enjoys having to guide a dim-witted non-player character through various horrors while being whined at from behind that you're going too fast, but to be fair to her, she isn't totally useless. If you give her a weapon, then she makes a decent attempt at defending herself, and it's absolutely impossible to be scared even of a ghastly Ring-style spectre when you're standing at either side of it and hitting it alternately with a spade and a handbag. The Patient monsters later on are really annoying because they hit you continuously, but it's not so bad when you can whack them once and then they'll tumble down the stairs burping repeatedly.

I'm not totally certain how I feel about the large amount of "backtracking" in the second half - you visit all the places you've been in before in turn, but the things you have to do in each are significantly different. Nevertheless, it feels like a bit of a slog (especially combined with the escort mission you're having to go through) seeing as you hardly see any new locations - it seems that you're just doing busywork to slow you down from finishing the game.

What I really miss, though, is the puzzles. They're absolutely nowhere to be seen. The series used to be known for them - Silent Hill 1 had one of my all-time favourites in the piano puzzle near the beginning, the kind of thing that takes a while to understand (you have to read a poem scrawled on the wall and work out how it corresponds to a sequence you have to tap out on the piano keys) but gradually becomes more and more understandable and you feel fantastic about it when you work it out. In the third game, the normal-level puzzles were about the same level, but the Hard ones were insane. The first one in the game... well, actually, the best way to do it is to show an example. Let's just say you're presented with this.

In here is a tragedy --- art thou player or audience? Be as it
may, the end doth remain: all go on only toward death.

The first words at thy left hand: a false lunacy, a madly dancing man.
Hearing unhearable words, drawn to a beloved's grave---and there, mayhap, true madness at last.

As did this one, playing at death, find true death at the last.
Killing a nameless lover, she pierced a heart rent by sorrow.

Doth lie invite truth? Doth verity but wear the mask of falsehood?
Au, thou pitiful, thou miserable ones!
Still amidst lies, through the end cometh not, wherefore yearn for death?
Wilt thou attend thy beloved?
Truths and lies, life and death: a game of turning white to black and black to white.

Is not a silence brimming with love more precious than flattery?
A peaceful slumber preferred to a throne besmirched with blood?

Ah, but verily... In here is a tragedy---art thou player or audience?
There is nothing which cannot become a puppet of fate or an onlooker, peering into the cage.
Get a 4-digit combination out of that, if you dare.

Anyway, they seemed to think that they'd gone over the top with things like that in the third game, because SH4 contains absolutely no puzzles at all. There are exactly three places I can think of where you don't have to unlock something by just using a key on it. The first of them involves needing to go and look up a phone number. The second one is a larger task where you need to place things back in their rather obvious correct positions around the building to complete memories and turn back time. The last is another one that involves multiple items in that you need to place four plates on a wall, but you're explicitly told exactly where to put each one. It's just not as clever as it used to be.

In the end, we got the best ending by sheer luck and the skin of our teeth, and thanks to the wonder of Youtube I didn't even have to restart and go through the game again to see the others. The worst possible ending is probably the most surprising seeing as Henry actually manages to show a reaction that isn't best transcribed as "?" during it, but the best one is equally worthwhile because he actually attempts a smile.

So will it keep me sleeping with the light on while Whitney's away next week? In all honestly, probably. The idea of things subtly changing in what you think is a safe place is a particularly frightening one. But if it does get to me, I can always rely on the Internet to ruin it for me. 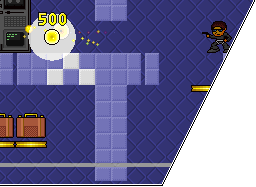