Back to Reviews page
One of the potential problems with listening to bands that have been around for around twenty years now in one form or another (that form being Helloween, mostly, in this case) is that sometimes you feel that they're never going to top their classics and that each album will represent, to some extent, a further slide into mediocrity. Which sounds like a bit of a depressing way to start a summary of an album, but once a band's reached its peak or seems to be on the way there, you tend to desperately hope that they won't do anything disastrous.

I used to think of Iron Savior and Gamma Ray as basically the same band under two different names (mostly because one started off as a side project of the other and 75% of Gamma Ray's current membership were in it), but listening to the two albums I got last month side by side has made me realize that they've really evolved to be very different. Gamma Ray fit the extremely happy, helium-fuelled image of power metal and have not yet been informed that it isn't the 80s, whereas Iron Savior escape the stereotype despite being more old-fashioned in different ways, relying on a more aggressive Judas Priest-like sound complete with the man with one of the lowest voices in the genre (normal human range).

In fact, this is something that's noticeably different about Megatropolis (which, yes, I did say sounded a bit like Dr Robotnik's secret lair when the title was announced) - usually it's a scientifically inexplicable fact that large amounts of cigarettes and alcohol cause people in Britain to die off very quickly, and yet people in mainland Europe can smoke like the Industrial Revolution and have a bottle of wine a day and still live to be about a hundred and fifty. But despite keeping in a David Hayter-like balance for nearly ten years, one or both seem to have taken their toll on Piet now, as you can really hear a difference in his voice here, as if he's straining more to hit and keep notes. The Iron Savior sound is still there, mostly in the sci-fi twinge that they have on their guitars, but for some reason the previously amazing chorus sections are all but absent.

That's not to say it's a disaster, though. A week ago I would have had clear songs I liked and disliked, but a lot of them have grown on me recently. Running Riot starts things off in a fairly mediocre way (and, though I'm usually against reworking things because of unfortunate coincidental current events, it would probably have been on my list of songs not to release the month after the Virginia shootings...) After that, things get rather better.

Two highlights, in different ways, are the songs in the middle of the album - Cyber Hero seems to be a tribute in equal parts to Doom and World of Warcraft, with lyrics that make Rhapsody look positively Shakespearian, and Cybernetic Queen, despite suffering much the same problem, sounds so amazingly like something out of the 80s despite the band's usual escape from that trap that it's become one of my all-time favourites from them. I would have linked to it because Youtube has all the music in the world, but the only trace of it there is it being performed fairly badly by a South American band. The other of my inexplicable favouries is A Tale from Down Below - it's one of those songs that seems to work largely because of its unusual title, and I don't think I would have been anywhere near as fascinated by it if it had the obvious name of "Heal Me" or anything else.

I was slightly disappointed that their previous album Battering Ram cut back the idea of continually expanding concept albums, with just a couple of songs giving a vague notion of a storyline. This album goes back to being a concept album again, but about a city - possibly a view of the earth well into the future - and the only song directly about the Iron Savior itself is the ominously-titled Farewell and Goodbye. As well as providing the token word on an Iron Savior album born from lyric writing with the aid of a thesaurus ("deracinated" is this year's choice, and immediately after it he uses "diluted" when he means "deluded"), it sounds like it's definitely the end of its storyline. And that's disappointing for a plot that's been expanded for eleven years - when it has Doctor Who-style lines like "And how I wish to be what I can never be", if you don't feel a bit of empathy, you're not human, are you? Even if saying something from a metal sci-fi epic is emotional is like saying you were deeply scarred by an episode of Look and Read.

Unless it was any of the ones with Charn. He was just a walking nightmare. 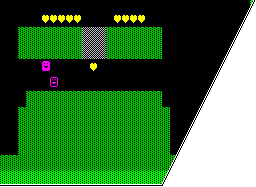